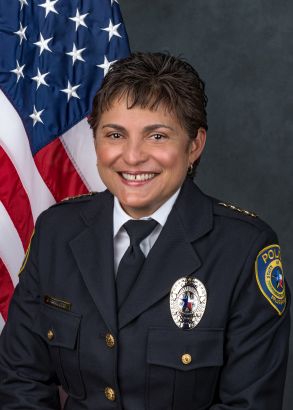 Chief Robledo served the City of Austin for 30 years and has more than 15 years of executive and supervisory experience. She joined the City of Pflugerville Police Department as Interim Chief on January 6, 2017 and was sworn in as the Pflugerville Chief of Police in an Oath of Office Ceremony on February 14, 2017.

In her time with Pflugerville Police Robledo has increased transparency of the department by implementing the use of Digital Neighborhood Watch and Crime Map programs. Robledo regularly supports PfISD school district events, the Pflugerville Falcons Special Olympics team and established the Blue Guardian Mentorship Program in Pflugerville chapter, a program she began in Austin and has been adopted by other Texas agencies. Robledo believes in engaging her community by being present and involved in the community. Robledo expanded the Police Department’s social media footprint and she uses Facebook, Twitter and Instagram as another tool to increase interaction with members of the community. Because of her dedication, the department has almost 25,000 followers across seven social media accounts.

Robledo has emphasized the importance of first responder mental and physical wellness within the department. As part of this effort, she created the first mental health resilience annual check for each employee with industry expert Dr. Tania Glenn.

Robledo values employee wellness as part of creating a strong team, and worked with community partners to update the employee gym, created the first peer support program for officers, implemented an employee recognition coin ceremony and a chaplain-training program. Robledo has added a “Family Night” to the mini academy to welcome new officers’ families in addition to a Chief’s Run at graduation to include family, friends and the community the officers will serve.

Robledo has a Bachelor’s of Science in Physical Education from Angelo State University. Her goals then were to coach and teach but her life took a different turn. Her passion is to mentor kids who share the same traumatic childhood she experienced and encourage perseverance and strength to overcome. Robledo believes that family isn’t always about DNA; it’s about the bumper guards in life who helped shape her. “Don’t judge someone’s broken fence; admire the flowers in their garden.”