The Greater Austin Hispanic Chamber of Commerce (GAHCC) has named Chief Jessica Robledo as a recipient of this year’s Latina Industry Leaders Award for Public Service. Eight women will be recognized at the virtual Capital of Texas Latina Industry Leaders Awards on Friday, May 29 for their dedication to the community as business owners, non-profit leaders, community advocates and public servants.

“I am so humbled and honored to be considered for this award, much less be named the recipient,” said Chief Robledo, “I hope to be a seed of hope and strength for one Latina out there that is scared to fail and overcome obstacles.”

Awardees were nominated by members of the community for their positive impacts and outstanding leadership. For more information on this year’s awards, visit gahcc.org. 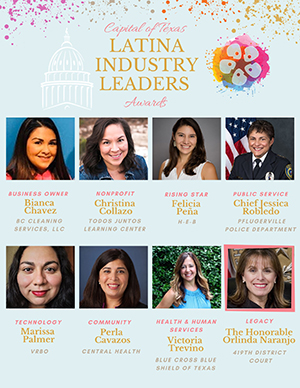 Eight women will be honored by the Greater Austin Hispanic Chamber of Commerce (GAHCC) for the Capital of Texas “Latina Industry Leaders” Awards that will be hosted virtually on May 29th at noon. The online event, presented by IBC Bank, will include special remarks by Mayor Pro Tem, Delia Garza -- the 2019 Public Service Latina Industry Leader Honoree.

“The continued growth and prosperity of our nation is directly connected to the ongoing growth of our Latina population,” said Luis A. Rodriguez, GAHCC President and CEO. “By the year 2060 Latinas will form nearly a third of the female population in the U.S. and they continue to make progress by increasing their college degree attainment; advancing in professional workforce in the areas of law, medicine, teaching, and management professions; and with more than one million Latina owned businesses in the U.S., Latina businesses are growing at a much faster rate than businesses for all women. We are extremely fortunate to have some of the best Latinas in our community, and that is why we are thrilled to recognize them at this year’s Capital of Texas ‘Latinas Industry Leaders’ Awards.”

The annual Capital of Texas Awards recognizes Latina Industry Leaders who have distinguished themselves through their business leadership, notable community contributions, and overall reputation within the Greater Austin community and their respective industries.

About the Greater Austin Hispanic Chamber of Commerce (GAHCC):

Established in 1973, the GAHCC is a 501(c)6 nonprofit organization whose primary goal is to continue the advancement and progression of a strong and stable economic culture for Hispanic Businesses. Our Board and Members represent diverse industries from corporations, small businesses, nonprofits, to governmental agencies that touch all corners of the Greater Austin area. The mission of the GAHCC is to be the leading resource and advocate for the Hispanic business community.